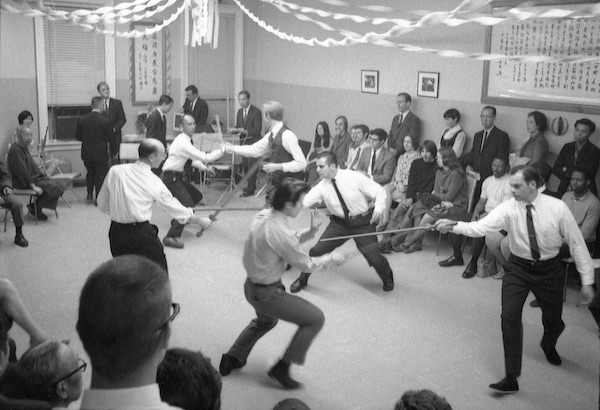 Around 20 years ago I experimented with padded swords. I had become frustrated because there were certain situations that came up while fencing which demanded a response that might prove dangerous with a wooden sword. I felt that I had to hold back and that the use of restraint impeded spontaneity and flow.

I worked through several generations of padded sword models and finally found one that fitted the need. It had enough weight, was soft enough not to hurt even with a vigorous stroke. It had some feeling of edge, plus it was delicate enough so that if it were wielded with too much strength it would break, a costly admonishment to the wielder.

I took it to the co-op that Maggie Newman sponsors on Sundays, where there are always excellent fencers in attendance. Some liked the padded swords and some did not. The ones who did not said that they didn’t have the right feel (of course they were not steel or wood) and the ones who liked them, mostly liked them for the wrong reasons, it seemed that as soon as they realized that they could hit hard without causing injury, they began to wield them like ‘swashbucklers’ that is, without restraint and without adhering to the Tai Chi principles.

Soon after, I conducted the Tai Chi fencing section of a local martial arts tournament in order to test the efficacy of these instruments. Helmets were required by the tournament directors and believe me they needed them. They went about bashing each other without mercy, managing to break half of the swords in the process.

I was very disappointed. I knew that if the swords were used with care, correct energy and respect for the Tai Chi principles, that they would also be a invaluable fencing tool. But I gave up, seeing that people were not ready at that time. (It was expensive to keep making new swords as well.)