In the Classics it is said that everything moves from the centre. The centre must stay quiet and subtle and the legs and arms move from it and around it. As we improve the centre becomes fine and stable and we become aligned, balanced and in harmony. If we lose our centre we become scattered and we lose integrity.

The Japanese Sword Classics use the idea “The Seat of the Sword” to refer to the Dan Tien as related to swordplay.

“Both the positioning of your feet and the carriage of your body should not be disconnected from your Seat of the Sword.”

At the highest level, our blade will be relentlessly seeking the O’s centre. Initially this will be an intention and whether it works or not is relative to the O’s skill. At some point it will hopefully become a natural act, as with magnets seeking poles, or flowers turning towards the Sun. 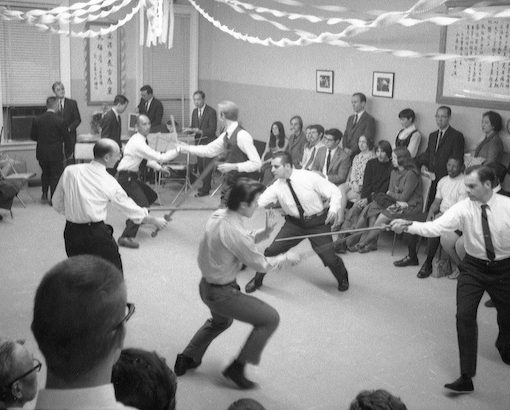 Blocking or pushing an attacking blade aside instead of moving the body out of the way.

This sometimes happens while doing forms, in dreams, while reading the Classics or viewing films of the master…

“Gravity is the root of all grace.”