Of course the body must keep the basic alignment that we developed while doing the form and push hands. One mistake that cannot be tolerated in fencing as much as it is in form and push hands is ‘butting’ which is leaning with the head forward.

The torso is mostly turned one eighth to the left, with your gaze facing the O. Your left sword fingers are positioned in front of your chest, as they are in “Raise Hands” in the solo form. Your gaze and your blade face the O. When the O advances toward you, circle to your left, this will get you out of the way as it brings your left hand in closer proximity to the O’s right arm. We do not back up more than one step, since we prefer not to back into a wall, off a cliff or into a friend of the O.

(In western sport fencing they play on a long narrow strip, and mostly move back and forth.)

The edge of the blade must move exactly in the direction of the blade’s movement. For example in a horizontal cut any upward tilt of the leading edge will cause it to ‘fly’, to move upward off its intended path. If there is a downward tilt, it will ‘dive’, moving downward off its intended path. If one of these off – line cuts were to meet flesh while using a sharp sword, a messy gash would result instead of a clean cut. If it met something hard like a bone or branch it would very likely twist, causing damage to the wielder’s wrist.

With all thrusts the blade should move in a straight line, like an arrow, without any wavering or wagging. The exception to this rule is in the three jumps wherein the sword makes a wave motion.

In cutting moves a good test of power alignment is to let someone hold the sword point then try to make the move from your centre. This exercise will allow you to feel the correct line – up of your body to shoulder, to elbow, to grip, to edge or to point.

Alignment doesn’t mean that things are always in a straight line, but that components must be aligned according to their nature and their function. Many of our Tai Chi alignments are circular or angular; they are combinations of body, direction, energy and purpose or intention.

Keep in mind that the final alignment we are all reaching for by practising these basic alignments is the alignment of our essential self with that of the TAO.

Today’s calligraphy 劍 shows a sword – or, as you may detect in the details, a two-edged, pointed blade. The sword is […] 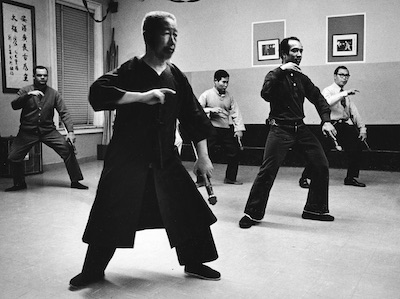 The Sword Fingers are used as a balance to the sword hand and to round out the posture, as in “Raise Hands”.