Two issues are involved here. One is how the sword moves and the other is where the movement originates.

The sword is long and narrow like a stick; it moves with little effort along its length as it is lined up like an arrow when we thrust, much as in western fencing. In order to affect a slice or cut western fencing manipulates the point by using arm and wrist strength. This works quite well with the extremely light sport fencing instruments but not so well with the heavier duelling swords that preceded them.

Tai Chi principles lead us to moving the point by moving our grip / hand in the opposite direction, leaving the centre of the ‘stick’ relatively still like a lever, with little wrist strength required. The Tai Chi sword is heavier at the handle than other swords, with its centre 2 to 6 inches in front of the guard. This centre is where its stillness lies and that enables us to move a somewhat heavy sword lightly and quickly. Our arms do not move much from our shoulders but are directed from our centre.

When cutting the movement of the blade requires special attention. In grand cutting movements such as “Block and Sweep” the sword must start out by being moved along its length, with the pommel aimed in the direction of the intended cut. As we turn from our centre the centrifugal force will help the blade speed to increase and the point to extend. The forearm and the sword begin at about a 90-degree angle to each other, and by the time the blade meets its target, the forearm and the sword are almost lined up.

While executing any cut the blade must travel from edge to edge. Any deviation will cause the blade to fly or dive, or to some degree, deviate from its intended course.

On the other hand, while receiving the O’s blade defensively, that is, while sticking, adhering, listening and neutralizing, the blade is kept at whatever angle is appropriate for those skills. Then, as we cut or thrust, we change the blade angle to cutting mode.

Since the origin of these movements is from our centre (Dan Tien), the sword hand and blade stay mostly between ourselves and the O, whilst moving from, and with our centre. This is more crucial with the sword than with the empty hand, as most martial artists can take a strong punch or palm strike to the body, but no one can receive even an inch of sharp steel without being seriously inconvenienced.

Tai Chi Sword – An Instrument of the TAO

The two characters 玉宇（yu yu）mean Jade House. The traditional value of jade in China The Chinese admiration of jade stones goes a […] 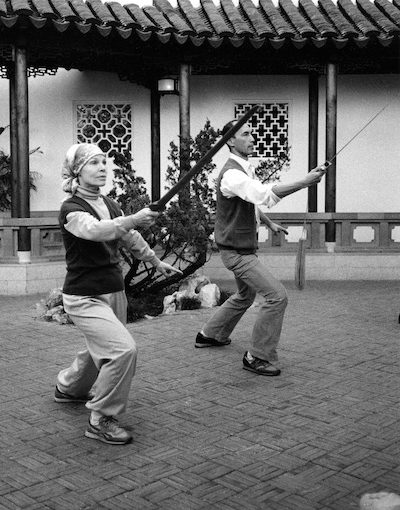 To recover from a ‘Beat and Cut’ attack as commonly used in non-Tai Chi fencing, when the…