#Martialmonday – Dealing the punches or taking them? – Form application Ward off left and right

In the form, the movements “Ward off left” and “Ward off right” are movements to protect oneself. More precisely, one protects one‘s space: The space between arm and body is a space that no one should enter without permission. If somebody tried, it would be understood as aggression.

That means, we are practising a defensive movement. But isn‘t attacking the best defence? In Taijiquan, this is true – but not in the sense that any random aggression is justified. It is rather the the movement that is the same in both cases – whether you expand to guard your space or you expand to deal a punch. This weeks #martialmonday deals some punches!

How to ward off left and right in a proactive way

The process of the exercise is the same as in the elbow strike, but this time the shape is different. The fist (actually the fingers forming the fist) goes diagonally up and out. How far it does go out, is up the the practitioner. The focus of the exercise is to go precisely into the shape. If you train with a partner, there shape ends exactly on the pad or slightly (later maybe a bit more) behind the pad.

To be a good partner – taking it in the right way 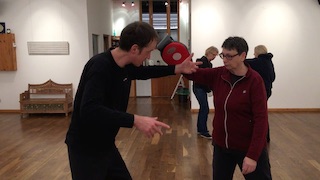 The partner who is holding the pad, is practising at the same time. She has to ensure that she will be able to take the punches with her whole body. Therefore, she has to go “against” them at the right time. – That means, she has to go into a shape which lies a little into the direction of where the punch is coming from. When both shapes overlap, both forces neutralise themselves. Both partners get a feedback on their status – while minimising the risk of injury. At the same time, the unity of attacking and defending movements becomes clear.

If you need to take some steam out of the exercise – before things get too tense: just pull away the pad now and then. The punching partner will then see, if he grew into a shape or if he gathered momentum to push the pad. He may also see how his shape looks and where it ends. The partner who pulls away the pad is at the same time practising his timing. – Pulling away too early will cause the partner not too start at all or to interrupt the action.

Watch our video for a little repetition of the first movements of the form and then: bam bam bam!

#MartialMonday 13 – Indirect Force – Application Press Indirect force The mysterious jin energy can be translated as a practice goal: not […]

#martialmonday 12 – I’m stuck! v. I’m off then. The point of attention in pulling – application (block and) punch This week […] 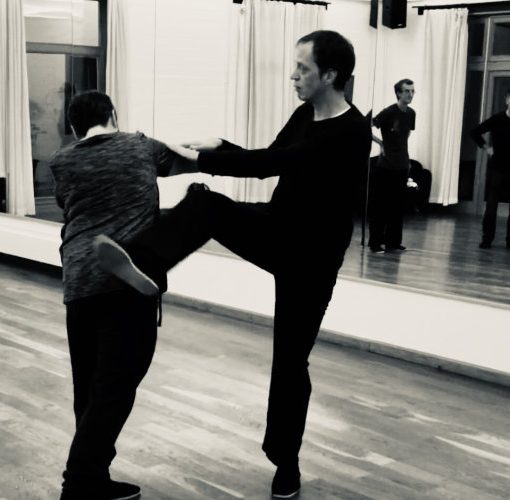 Welcome back to #martialmonday! This week‘s video shows us training the form application of the last part of our form. One partner […] 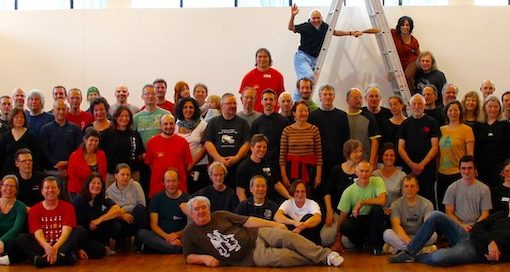